How Sport for Development and Peace Works (Pt II) 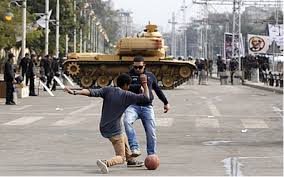 Part II in our five-part series on how sport for development and peace works.

In this short piece, we look at the inherent peace-building and peace-making characteristics of sport.

Example 2: SPORT IS A PEACEFUL ACTIVITY

Football is our go-to sport. There's a few reasons for that. For instance, its the most international sport we know, it's easily understood, it can be played by anyone and it takes little equipment or set-up.

But another important reason we like to go with football is that it has certain characteristics that make it particularly useful as a peace tool.

Take the shape of the game. It flows and shifts, moving over the whole field in a series of fluid movements. There are no lines or obstacles on the field itself to stop movement and flow. Every part of the field is used and anyone can go to any part of the field at any time.

This shape ensures that the space is shared. Players go in and out of each other's physical space constantly. Players must learn to share physical proximity with their “opponents” and attempts to deny others access to space will be penalised.

Competition in football is not between players as such. It is over possession and movement of the ball. Players are not seeking specifically to stop their opponents, but to stop, or to limit progress, of the movement of the ball. This is therefore, at its core, an objective contest rather than a subjective one. This acts to limit personal investment in actions within the game or in the result.

Finally, there is no game without another team. With no opponents, its just a kick-around. As such, a common phrase as players shake hands at the end of a game is “Thank-you.” This is a largely unthought of utterance, but it is a reflexive, perhaps even traditional response to the value of having someone to compete with.

A final reason football is a powerful peace tool centres on the basic point of the game. While the apparent ultimate aim is to score more goals than the opponent and thus win the game, more subtle forces are also at play.

Football is a game that is based on controlling space and possession. Those that can win on these two counts will generally win the game. As such, it mirrors human societies, which are often struggling over just such factors. While the space may be country-sized and possession may come in the form of money, jobs or political power, the dynamic that commonly exists between competing communities is broadly similar.

As such, football can be used as a symbolic substitute for more aggressive forms of such contests. This explains why football has been used as a vehicle to spread violence. It's easy to draw comparisons between football and war, and it's easy to fight such a war from the stands or even on the field, in comparison to a real war.

But, that strong symbolism can also be used to de-legitimise violence and to give it a far more peaceful place to exist. In a football setting where actual goals don't matter – where teams are awarded points for fair play for instance rather than just the goals scored -  the strong symbolism can be utilised to accentuate the workability and utility of less disabling and ultimately more peaceful contests.

Football is a little special in these ways. Other sports, like netball, also share some similarities. But, while these sports may be more easily applicable to peace-building and peace-making scenarios, it does depend on the communities, the situation and the facilities available.

For instance, football in some communities is not culturally acceptable for girls. While girls are less likely to engage in violence and war than boys and young men, they are vital agents of non-violence and positive change. As such, to reach them, football may not always suit.

However, the fact remains that many sport, when properly conducted and well-integrated with wider programs, has, at its core, characteristics which can aid progress in peace and development areas.

Popular posts from this blog

Statement on Funding for the Rohingya Football Club

December 05, 2016
We are very pleased to announce that The Kick Project has received a $AUD16,500 donation from the Australian Government to fund a pilot soccer program with Rohingya refugees in Malaysia. The funds, coming through the Australian High Commission in Malaysia, will allow the charity to support the Rohingya Football Club which has become a vital part of the exiled Rohingya community in Kuala Lumpur. The program entails kitting out the team, providing transport to games and establishing a sports and community hub where Rohingya people can access sporting equipment and coaching. Young people, and girls in particular, are the long term focus of the initiative. The Kick Project founder James Rose says the Rohingya are in dire need of assistance. "The UN has called the Rohingya arguably the most persecuted group in the world. They've been forced to flee their homelands in Myanmar, where they have been made stateless by government decree, and many have lost their lives
11 comments
Read more

Post-UNOSDP - Is the IOC fool's gold?

June 20, 2017
This is a longer version of an article published on SportandDev.org With the United Nations Office on Sport for Development and Peace closed down by the global body, there is undoubtedly a void in this space in which many of us here work. But, for all the high profile oomph the UNOSDP added to the world of sport for good, it’s passing need not be seen as devastating. For one, the work the UNOSDP has already done in its 16 years of life has laid a platform for the development of sport for social justice. While many of us knew for years that sport had a wider purpose beyond mere business or entertainment, the UNOSDP has provided a base of credibility that may have otherwise taken much longer to establish. While much of the work is, in many ways, still to be done, the UNOSDP has left a positive legacy on which we can all build. More problematic is the shifting of the UNOSDP’s brief to the IOC. Obliging the IOC to administer to the peace and development facets
2 comments
Read more

In these times, find the joy of being human

January 22, 2017
The election of Donald J Trump as America's 45th President, confirmed in this week's inauguration, presents numerous challenges to human rights and people power. The boorish, misogynistic, arrogant tenor of his campaign has cast a pall over the rights of minorities in America and across the globe as his "America First" call, by definition, puts everyone else second or worse. The only equality in the scenario he presents is of the George Orwell type: that of some being more equal than others. Such a situation already exists of course. Western males wield more direct and indirect power in global terms than, say, a dark-skinned girl in a slum. Trump is hardly breaking new ground. But, his ascendancy gives that dark reality more momentum. It puts it closer to the centre of normal. His message threatens to break the positive values that link human beings to each other. Globally, governments, civil society and civilians need to make a stand. We need to step up to
1 comment
Read more